Postcards may be an endangered species. With wireless everywhere, you're never really out of touch. But I'm still a little old-school. I like sending them. And from what I gather, people still like getting them. Getting real mail is fun! The problem, though, is that it's hard to make vacation postcards exciting. You have next to no room to write (though this is less of a problem if you're a skilled Twitterattzo), but really..."Having a great time! It's lovely here! See you soon, SUCKERS." Not the world's greatest prose.

But Lisa and I have this figured out. We decided to detail last month's vacation in a bunch of haiku poems, and distribute them among our pals. We put a lot of thought into this. We made sure that no two people in the same social circle received the same poems. Of course, this assumes, pretty narcissisticly, that our pals would be so damn delighted that SURELY they would be comparing which little nuggets o'verse they received from us. Which is highly unlikely. But the point is we were being THOUGHTFUL.

So, five weeks after the fact, we're pretty sure that the third-class mail system has delivered all of the postcards (I said we were thoughtful. I didn't say we weren't cheap), so here is the complete Aruba Haiku-ba collection. Poetry, you guys. Classy stuff.

The girl is splotchy.
Kerry just wanted a base.
The skin cancer brews.

Mission Statement
Our mission here is
to keep a constant buzz and
wear no proper pants.

Off-Roading
Dangerous terrain
and guess what? You are driving.
This is not a joke.

The jeep bumps along
and I never thought this was
how I'm gonna die.

Snorkeling
Parrotfish seems nice
but he's only using you
for your Wonder Bread.

Boys
Single men are scarce.
It's okay, there is some rum.
Birds flock to the bar.

Just when things look bleak
along comes the Dutch navy.
There is hope again.

Hors d'Oeuvres
Cheese is so awesome.
We eat a lot of gouda.
Yum on a triscuit.

Mistaken Identity
Who is the old guy
singing Sinatra? Oh, it's
the prime minister.

Uninvited Guest
The sea is tranquil.
Calm. Clear. Without disturbance.
'Til fish in my pants.

Threat From Above
Pretty sky. I look
up to see blue. Or am I
soon pelican food?

Either Way A Winner
Icy clear with salt
makes me happy. Ocean? Or
margarita glass?

Our buddy Shwa has been in LA this summer doing...whatever the hell it is you do in LA. Lest we be bereft for too long, he came back for a visit recently, and treated us to some songs at Rockwood.

And the best song written about "Rookie of the Year," maybe ever. 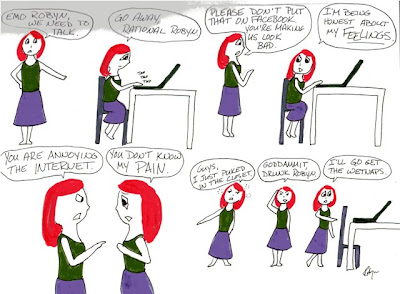 Robyn Draws: A Matter of Perspective 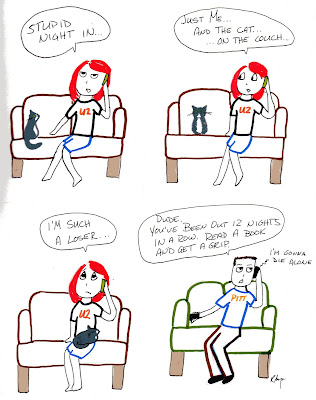 You guys remember the shuttle run? It was part of that godawful presidential fitness challenge they made you do in gym class, and it required you to run a short distance, pick up an eraser, run back, put the eraser down, run back, twist your knee, writhe around on the floor a little, then go to the nurse and get an ice pack and be really satisfied with yourself that you took yourself out of commission before you had to run the mile. At least that's how I remember it.

ANYWAY, the past few days I've been doing a shuttle run of sorts between Allen and Houston Streets, dashing between Rockwood and the Mercury Lounge, and various watering holes and cafes in between. I'm willing to admit it bordered on the compulsive this weekend. That's why I'm totally changing it up and going to hang in Park Slope for a while. Diversity is good.

We started things off Thursday night at Rockwood 2 with Mr. Tim Blane and company:

Then on Saturday, it was over to the Mercury Lounge for Bryan Dunn and his BADASS cover of "Careless Whisper":

Also at the Merc that night were our pals the Ramblers:

Then, just after the Ramblers were finished, it was time to dash around the corner to Rockwood to see Kyle Patrick:

And then a couple days later, it was back to Rockwood 2 for Misty Boyce:

...and Luke Wesley and Mike Grubbs!

Fireworks Over the East River

Filmed from my apartment. New York is awesome.