Following a brief Passover hiatus, it was back to the grind yesterday evening on the Lower East Side. First stop was a rare tiny acoustic show by Atomic Tom, otherwise known as Our Friends What Just Got Signed To A Major Label. Think all the best parts of the Killers and Franz Ferdinand, without all the messy guyliner. Ahn. So before they get all banging-Megan-Fox-famous and stuff, it's important to capture as many stripped-down Van Halen covers on their part as possible. Because of posterity.

There are other, better-shot videos out there of their original stuff, I guess, but you guys -- Running with the Devil. You know?

A lesser group of people would call it a night after that. Nuh-uh. Our intrepid crew then proceeded over to the Mercury Lounge for songstress/pianist/badass Misty Boyce's CD release soiree, where there was more rock to be had. Funky!

Tuesday done right, you guys!
Posted by Robyn at 10:28 PM

I tend to pick my pals and scenes carefully, and have been pretty happy with my crew since I've moved to NYC. However, this tends to cocoon me from other, more hostile, environments, and I forget what a socially-anxious freakshow I can be when put in the wrong situation. Last night, I was reminded.

The night started out promisingly enough. I was scheduled to go to Rockwood to see Mike Grubbs of Wakey!Wakey! fame (and if you haven't checked them out, for God's sake, please do so. You're welcome). Then I was to meet up with some long-lost pals from DC, and dance the night away. This sounds foolproof, no? I was so stoked about the evening, I boldly sported a more substantial amount of cleavage than usual. My titties and I were ready to take on the city.

The music was lovely, the place was lively, the bourbon was doing its job. More pals materialized in the side bar after the show, conversations about sex, music, and museums ensued. I was kinda in my element. I was "on," you guys. Happyhappyhappy...

But I had to tear myself away to meet my out of town pals. So I left the relative safety and comfort of sweet home Rockwood, and headed out to points unknown. There were hugs and reunions. So far, so good. And then we got into the bar...

Here's the deal. I live in NYC. Spaces are small. Crowds are plentiful. I know this. So as long as the crowd is friendly and happy, so am I. But this was not good. Too crowded. Too frattish. And the only available space was by the bathroom, which not only smelled like rancid farts, but did not endear us to the teeming masses trying to make their way to the can. The molecules in this place started vibrating badly. I lost my confidence. I temporarily got it back with some drinks, but that was not a lasting fix. I started getting awkward. I started talking about my ex. It was bad, you guys. There was to be no dancing here. I ended up fleeing the scene, directing the taxi back to Rockwood, thinking I could re-set the time-space continuum by going back to my happy place. Alas, my pals had moved on. I was adrift. I actually started to panic that the night was so not going to plan.

Then I recalled that I had other pals at a birthday party at a club up the street. Maybe we could salvage this night after all! I texted my pals, and without waiting for a response, I went up First Ave, determined to dance my pants. Up to the bouncer I went, ID in hand, plunging neckline on display. He instructed me to wait by the door. So I did. This was going to be okay.

And then some glamazons approached. Very pretty girls. Freshly made-up. Not appropriately dressed for the weather. They smelled nice. Their heels were towering. And oh, landy, the boobage. I considered my now 6-hour-old mascara. My overcoat and Gap jeans. My slightly scuffed boots. And my comely, but incomparable, decollatage. I watched as they were waved inside. I watched as several more were waved inside. I watched as a third group was waved inside. This was worse than junior high and summer camp wrapped up in gym class. I knew I wasn't getting in this place. This was a New York I didn't know. This was a New York I didn't want to know.

I wound up slinking off to the Hot and Crusty, seeking solace in an Oreo cheesecake at 2 am. My pals finally texted me back. They were long gone from the club anyway, and called it a night a while ago. It was time to do the same. 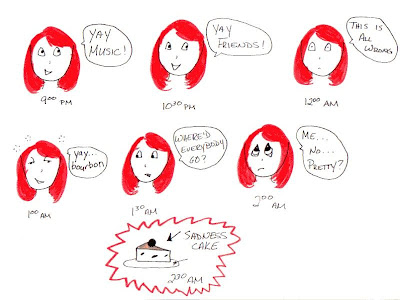 I think this is my first fight with NYC in the seven months I've been here. Which, when you think about it, is pretty good by any relationship's standards. And not every weekend can be a winner. But I think NYC owes me some flowers. Or some make-up sex. I'm putting it on notice until it does so.

Here's some footage of the high point of the evening, when Mike covered Cyndi Lauper. See how I could have been fooled into thinking this night was going to be amazing? Psh.

It's just one of those weeks where I probably spend more time at Rockwood then my own apartment. But I'm okay with that. Enjoy the musical stylings of Patrick Thomas...

Hey, it's either this, or more cat videos. Which I also have. This is the best blog on the Internet, you guys.
Posted by Robyn at 3:12 PM

A little something for everyone last night on the extended block that houses Rockwood Music Hall and Arlene's Grocery. Touching Dylan covers to unborn sons? Yeah. We're on it. And so is Benjamin Wagner:

Chicks who can sing the nuts off some rock-disco while giving my dear, darling, sensitive-lad singer/songwriters something to really cry over their Taylors about? Totes. I give you Mother Feather:

Sometimes, that's just how we roll. Here's some footage from this Saturday at Bar 4, where Ms. Lara Ewen paid tribute to the late Alex Chilton, and this happened:

And then, Matt Singer took the stage, and everyone helped with percussion, and this happened:

And then I left, all sober-like, and was very proud of myself, and then realized I forgot my credit card, so I went back, and I drank more, and then Jessi, Lara, and I attacked the photo booth, and this happened:

It was a good Saturday, you guys.
Posted by Robyn at 5:55 PM

Weather that only deluded seagulls on the East River could love.

What is the deal with the United Nations picking the most unwieldy names for their international observances? Is it a translation thing? Search me. While we try to figure that out, I'm pretty pleased that an op-ed I helped write with my colleague Chandra is on Huff Po today to mark the International Day for the Elimination of Racial Discrimination. Looking forward to the Global Week of Action for the Abbreviation of International Observances (GWOAFTAIO). I think I'll reserve that URL on GoDaddy right now.
Posted by Robyn at 4:10 PM

If you've been paying attention at all, you'll know that I spend the better part of my free time hanging around the various music clubs in New York. It's a habit I cultivated in fits and starts when I moved to DC, and became a full-fledged lifestyle after my last relationship ended. Funny enough, when you're with someone for a long time that frowns upon you engaging in certain activities (i.e. dancing, singing, drinking, fraternizing with the opposite sex, fraternizing with the same sex, maintaining good credit, etc), you become a little hell-bent on pursuing just those kind of amusements when you find yourself on your own.

But anyway, after I got whatever acting-out I needed to out of my system, I realized that I had accidentally found myself with a bunch of awesome, talented, lovely new people as friends. Some play music part time, some play for a living, some are photographers, writers, or just hangers-on who like to drink bourbon, dance spastically in the back, spend money and maybe, just maybe, meet boys. Guess where I fit in.

Two of my pals in this crew, the estimable Emily Rawlings and Lara Ewen, had a great idea to take over an antique store in Greenpoint, invite a bunch of people to play music for 20 minutes at a time, and turn it into a one-day only record store selling local music. Because as it turns out, it's damn hard to find anywhere in NYC these days that sells actual CDs at all, local or otherwise. It's probably the biggest difference between NY in 1999 when I last lived here, and NY now. So unless you're a gig rat like I am, local musicians have to hope that you're invested enough to find them online and pay money there.

So all day long, great people played great music and we drank great beer out of great paper bags and ate Pringles and sat on the floor and hung out and had us a time. And they made over $1000 that went straight to the artists who played there. And according to the NYC artist exchange rate, I assure you, this is very good indeed.

The project lives on at http://mayflylives.blogspot.com/ where the extra CDs will be available for purchase. Soon. Soon-ish. We kinda live and die by the -ish around here.

It was a bit of a love-fest, which is not a bad thing at all. Case in point, here's Bryan covering a song by Kelli Rae Powell, who couldn't perform her own stuff because she had an audition. Feel the love, you guys: