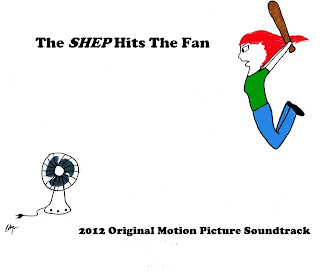 2012. You started out pretty damn well. And then you went goofy. Profoundly goofy. You imploded relationships and friendships for no other discernible reason other than you just wanted to watch us all spiral. You sent half my pals to Los Angeles. You dumped a huge, cold, dark, rainy turd named Sandy on my city. You broke my heart, scared the hell out of me and made my football team suck. A lot.

And then, at the very end, you decided to clean yourself up, get your shit together and stop being such a See You Next Tuesday. Astounding things happened in the world that gave me confidence in my work like I've never had before, and made me feel something like an honest-to-god grownup. My bank account may not have swelled, but it at least plateaued -- and that is an epic ACHIEVEMENT, people. I started writing again, and felt awesome about it. Friendships were mended. Conditions were stabilized. And you gave me a few reasons to rock an evening gown, and that's not nothing.

You were not my favorite year, 2012. Watching you unravel most of the time was like watching a drunk person roller-skate in traffic with a bucket on its head. Why is this happening? What am I seeing? Are we gonna die? Where did you even get roller skates?

But it all seemed to come ambivalently together in the end. It may not be "happily ever after." But it's at least "chill til the next episode." And I can live with that.