Boys' weekend; Get classy with scallops and lavender!

This weekend I had a pantload of fun with my boys in NYC. I chilled in the park and wandered through bookstores with my high school pal Alex, I had burgers and beer with honorary Team 215 member Koz, saw a kickass Travis gig with my rockstar friend Shwa, had pancakes on the Lower East Side with my new friend Andy, and then returned home just in time for my friend Chris' gig in DC. It was the best series of non-date dates I've had in a while. Thanks, boys! I think.

However, there was a certain amount of grubbiness involved in the weekend, as it was a bit hot, and I had but one outfit and little recourse for a shower. There may have been a bit of a mishap with a too-quickly-chugged Miller Lite as well. May have been. Only Shwa, and my confessors, and most of 11th Street between 2nd and 3rd Avenues know for sure...

ANYWAY, much as I enjoyed my dirty weekend with the lads, I felt I needed to take back what remained of my dignity and dainty-ladyness. I'm not sure how well I succeeded, but making this dish sure made me feel a bit more classy.

Method
Combine the basil, garlic, salt and pepper in a food processor until smooth. Add the lavender oil and 1 tablespoon of olive oil. Let stand for 30 minutes. Cut a deep horizontal slit through the scallops, but not the whole way through. Fill with the basil mixture, close with a wooden pick. Drizzle with the remaining olive oil. Heat 2 tablespoons butter in a skillet, and heat until foamy. Add scallops and sear for 2 minutes on each side. Scallops should be browned, and translucent on the inside. Remove from pan immediately.

If you can't find lavender oil, just sprinkle with lemon juice. Scallops can also be grilled rather than seared.

There! Don't we feel civilized? Now I'm gonna crack open a Sam Adams and watch the Phils. In my underwear. Class. Easy come, easy go.
Posted by Robyn at 8:40 PM

Some video of Miss Jess "Mustang" Graves from a house concert I went to last night. Wanna see more awesomeness from my musically-inclined pals? Check out my YouTube channel. Those who can't play, take pictures. And bake brownies. And draw fliers. And don't get paid. Hey, wait a sec...

Apparently it's Earth Day. I know this because there was a massive concert on the Mall this weekend, and because just about every other TV commercial over the past week or so is making me feel morally inferior about something I am or am not doing to save the planet. Don't get me wrong, I'm totally on board. I was the kid rocking a straight-up lunchbox rather than brown bags in elementary school, complete with reusable Tupperware sandwich holders. I even have a Tupperware cookie holster, so as not to waste precious Saran wrap, so I'm totally down. Just...please stop yelling at me. I have tiny little fetus feet anyway. They don't leave much of a footprint of any kind, carbon or otherwise. 'Kay. Thanks. 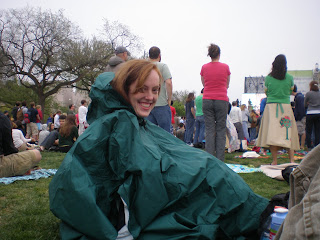 But I will say that the Green Generation can throw a kick-ass party. My pals and I went down to the Mall to catch the delightfully silly Flaming Lips at the free Earth Day concert. Nevermind that what started as a beautiful 80-degree day turned into a blustery, 60-degree day in about 2 hours. That's just Mother Nature saying hello. Happily, hippies like to share, and one of our number was kind enough to loan me the World's Biggest Most Ridiculous Poncho to break the wind. So to speak.

And speaking of the "Green Generation," that term was thrown around quite a bit, and I want to be clear that it refers to the heightened awareness of the youth of today, and not to the funny smell that pervaded the scene (and made everything extra special hilarious that day), nor the fact that the festivities were held in such proximity to 4/20. And these guys just love music. That's ALL: 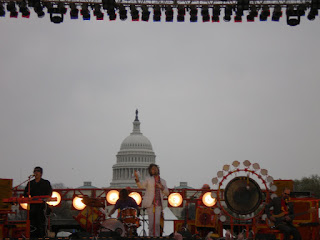 We did manage to get right up close to the stage, thanks to the zeal of my compatriots, emboldened by tasty street vendor food, and maybe a little bit of fermented apple-y beverages. So we were right up close to Wayne Coyne and the Lips. Close enough to be showered by the contents of his confetti bazooka. 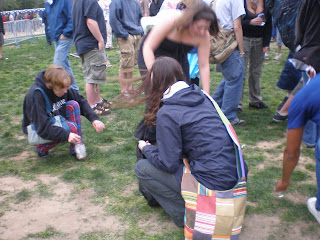 That did rile up the organizers some, but Mr. Coyne insisted that if anybody would pick up after themselves, it's a bunch of potentially chemically-altered, environmentally-conscious hippies. And wouldn't you know, when that show was over, the Mall by the stage was spotless. Save for a few hundred cigarette butts, because no one wants to touch those. 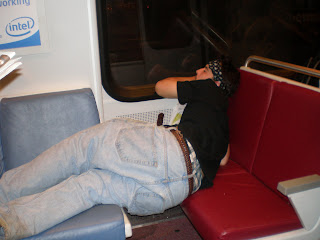 So, all in all, it was a good day. And so the tired celebrants trundled home on the Metro, including one poor random fellow who, in the span of two stops, made himself nice and comfy and went night night. Saving the earth is hard work.

I leave you with Robyn's-Eye-View footage of Wayne Coyne surfing the crowd in a giant bubble -- for the planet! XO

How to Force-Feed a Bunny

How we get down at OneTwoThreeFour Mass.

Way back on inauguration weekend, two childhood friends, we'll call them KraByn, decided to celebrate history by enjoying some frozen adult beverages with the American University crowd at Guapo's in Tenleytown.One friend, we'll call her Kra, excused herself to use the ladies' room.

Moments later, her companion received a call on her Sidekick. It was Kra, demanding that her companion get downstairs to the bathroom. Immediately.There, the friends discovered that Guapo's had entered into some strange pact with a bidet company, and had installed bidets in all of the ladies' toilets, complete with promotional materials for installing a bidet in the comfort of your own home. Since Guapo's is hardly the type of establishment where one finds such classy personal hygiene accouterments, and since one of the friends had a video camera, and since they were a little happy with margaritas, they decided to have a bit of fun.

And then all hell broke loose...

The Shep Guide to Passover

I just got back from four days back home for joint Passover-Easter celebrations. It seems to me that these two holidays coincide more and more regularly, which is really annoying if you're partial to ham and Peeps under normal circumstances, but want to try to at least make an appearance of keeping the holiday. Complicating matters is the fact that I'm the only one in the household that tries to go the whole eight days. I'm not a terribly picky eater by nature, so it kinda pains me to be the one who's all "Umm...actually, I can't eat this..." in my own house. Even though the Family Shep is crazy supportive, I still feel a little obnoxious.

Which is not to imply that I'm anyone's role model. I do my best this time of year, but it's rare that I go the full eight days. And something tells me that my code to following Passover may not jibe exactly with even Reform Judaism's handbook. To codify things a bit, this is the Shep Guide to Passover:


So that's it, basically. It's not terribly hard. And now, if I wind up going to hell, you'll know exactly why. Hag sameach.

UPDATE And if you do make it all eight days, you get to go to Five Guys, burst in, and scream "I need a Little Bacon Cheeseburger right the hell NOW." And then you win.
Posted by Robyn at 6:14 PM 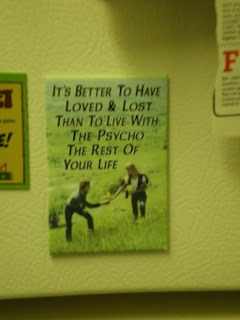 Well look who's finally joined the new millennium! True, I took baby steps by re-posting the blog on MySpace and Facebook, but I had to accept that the old NYU-sponsored homepage just wasn't cutting it anymore. I mean, I started the damn thing as a homework assignment in digital journalism class in 2001. It was literally done on notepad. And it showed. And it had the catchy URL of http://homepages.nyu.edu/~rps214. I mean really, a tilda? Who has a damn tilda in their URL? Christ...

So I took good ol' NYU blog out for a nice walk. We looked at the sunset. We talked about the eight years we had together. NYU blog wanted to know where we were going next. I told it we were going somewhere wonderful, and there'd be rabbits there.

So here's the new digs. I'll probably still re-post on MySpace, to pretend I still have some kind of a presence there, but I rather like it here. We'll see how it translates to Facebook, and if anyone cares. Whatevs. It keeps me off the street. And all 214 (holy balls) entries over the past eight years are still archived here, if you want to relive the good times. Thrill as Robyn grapples with 9/11-induced PTSD! Don't doubt her for one minute when she decides that leaving New York for DC is a swell idea! Marvel at her amazing track record with live-in relationships! Get a great cheesecake recipe!

Robyn on Blogspot. It's about damn time.