Why I choose to do these prior to putting on makeup, I don't know.

I Think My Maintenance Guy's Full of Crap

I have the loudest radiator in New York City. Is this normal? You decide!

From my pal Andy Mac's CD release party at the Living Room on the Lower East Side.

Let's be clear. I'm not slovenly, and I'm not a raging tomboy, but I think it's fair to say that I'll never be mistaken for a fashion or style maven. Ever. It's just too much effort. I can clean up reasonably well, but I'll never be counted among, for example, the leggings mafia that currently is swarming NYC. Don't get me wrong, those gals look great in their semi-pantless, giant sweater, elaborately scarved getups. But I'm too lazy, and too cheap to bother with things that will look ridiculous three years from now. Plus, I have these things called "curves" and an "ass," which just precludes the whole thing.

Which is why it's semi-hysterical that my makeup artist/hairstylist friend Cassandra Kenendy featured me in, of all things, a beauty blog. She made me up right purty for the wedding of my friends Bryan and Emily. Bryan and Emily, being the artsy sorts, had their awesome, rock and roll wedding at the Williamsburg music venue Public Assembly, which is unspeakably cool. Emily encouraged the ladies to "dress to get noticed." So, this one time, I figured I'd comply. With a vengeance. We just went Rita Hayworth on this thing. Or Rita Hayworth goes to Billyburg. Elbow-length gloves, my old slinky black prom dress (god bless you Weight Watchers and everything you stand for), crippling silver heels, and black eyeliner. A lot of black eyeliner. Like, still-wearing-it-at-the-laundromat-the-next-day-after-four-attempts-to-remove-it amounts of eyeliner.

How did it turn out? Check out
CK's blog, and judge for yourself: 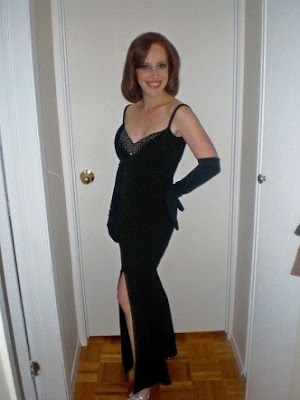 And to think, when I first met Cassandra when I was a 22-year-old new hire she described me as slinking awkwardly around the office "like Gollum in a twin set." Upgrade.
Posted by Robyn at 10:51 AM

Bruce Springsteen: "The Rising/Born to Run"

How you close down a stadium.

Dispatches from the Ladies' Room at Giants Stadium

Who gets up during a Springsteen concert in Jersey? Apparently, nobody.

Work Stuff: Discussing "The Torture Report" on NPR's On the Media

I helped get Larry Siems of the PEN American Center on National Public Radio's On the Media show, discussing a project he's helped us work on called The Torture Report. The ACLU launched a site recently that aims to make the thousands of documents released on the torture of detainees accessible to the public, and have done so through a Web site that presents the information as an interactive report, where readers can engage with experts and commentators. It's really interesting. In case you need a dollop of foreign relations to go with your daily perusal of I Can Has Cheezburger.

My friend Bryan is getting married next weekend, and to emphasize this fact, has had approximately three bachelor parties. We think. The accountants are still verifying the total tally. But that's fine, as long as we all get to rock out like this. With the estimable Andy Mac on drums and Jim MacNamara on upright bass.

Hey Baby, Want Me To Set Your Potato On Fire?

I haven't blogged much in the past two weeks. 'Cause you know why? Because work, Judaism and rock and roll have been kicking my ass in the best and worst ways. I spent Rosh Hashanah in Philly, came back to NYC, then turned right around for my first ACLU business trip back to DC, staying at a hotel mere blocks from my old place. It was weird coming back this soon. Kinda like running into a recent ex at a party, and having to make weird small talk. "Oh, DC, hiii...you're looking well. Am I seeing someone? Well, you remember New York. Yeah, well, it's soon and all, but it could be serious. You? Well, someone will come along. Well, anyway, I'd love to stay but I gotta go do a thing. Say hi to the family." And then you jump on Amtrak and run like hell back to a city that knows how to treat a lady. NYC tells me I'm pretty...and lets me take Acela. Snack on that, DC.

Oh, and the trip? We just briefed the Supreme Court press corps on the upcoming court term, and earned a whole mess of juicy articles, including the LEAD STORY ON THE FREAKIN' FRONT PAGE OF THE WASHINGTON POST. No big. 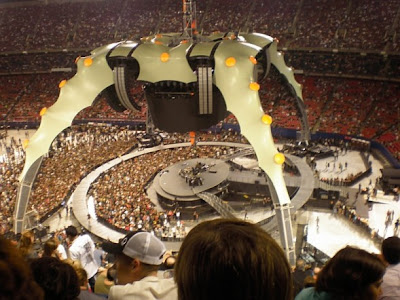 I got back to DC just in time for back-to-back U2 shows at Giants Stadium. A refresher on Robyn and U2: it could be argued that U2 is responsible for changing my career trajectory into social justice, my entire outlook on music, and consequently the great bulk of my adult life. Well, U2, and, you know, terrible relationship choices and a volatile geopolitical climate. So it's a big deal when they tour, which is every four years or so. Which is why I gladly made the four-hour round trip C.F. of a journey on NJ Transit to the Meadowlands. As a word of advice, if you plan on sharing mass transit with 80,000 other people at the exact same time, it better be for someone who changes your life. Otherwise it might be the most miserable experience of the year. The first night we were way far away, the better to see the ridiculous claw from outer space stage setup. 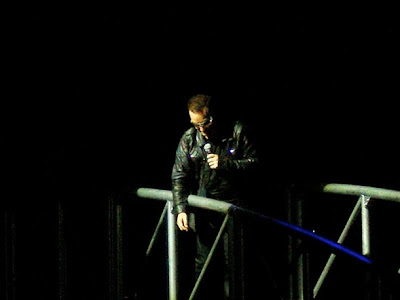 And the next night we were right up close! 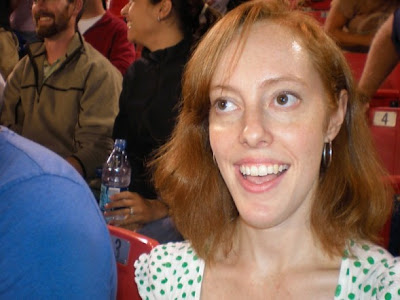 If you don't think money can buy happiness, I respectfully beg to differ.

Now granted, all of this took a bit of a toll on the system, and consequently I haven't been all that able to sleep more than five hours a night for the past week and a half. Even the metabolic crash of Yom Kippur didn't slow me down. I didn't go to services, as I'm not yet part of a congregation, but I did make homemade chicken stock, which was the second most Jewish thing I could think of. And I cleaned my apartment. And broke fast with my friend Alex at a German beer hall in Brooklyn. Achtung bubbe.

And I accidentally set my potato on fire in the break room yesterday. And no, that's not a euphemism for anything. But it should be. Hey, you get the lead in WashPo, you get to set your lunch ablaze in the microwave...ONCE. It's a rule.

Throw in about a half dozen shows, an Eagles win and a loss, and some awful dietary decisions, and I'd say that brings us up to speed. Now if you'll excuse me, it's 7 pm on a Friday, I'm about to leave the office, and I have an intense night of sitting on my butt, watching Lost, and eating cheese to look forward to. And I think I'm gonna love it.
Posted by Robyn at 5:52 PM