Christmas With The Sheps

Yuletide at the Shepherd household is very special indeed. Not just because we do the Christmas/Chanukah thing, because that's becoming progressively less weird as time goes on, but because I'd like to think we put our own little stamp on things. We run a bit of an open house during the afternoon, so if you're in the 18954 zip code, you're cordially invited to stop by. If, however, you can't manage it, here's a little guide to how we do here:

1. Music: The Shepherd family has a limited number of Christmas albums, but we are fiercely loyal to the ones we play the most. Elvis sees a lot of rotation, as does the jazzy Ramsey Lewis Trio. But, as mentioned previously, the paramount Shepherd Christmas Album is John Denver and the Muppets: A Christmas Together. Yes, I know it sounds awful, but please revisit last year's blog to hear the full treatise on the subject. It's an emotional issue.

2. Menu and activities: Pancakes must make an appearance prior to attending to the stockings, accompanied by the first of several Scarlet O'Haras of the day (SoCo, cranberry and lime). This is the only day of the year on which it is acceptable to consume this particular beverage. You may start when trimming the tree on Christmas Eve, but by the 26th, it's back to Manhattans, gin martinis, and bourbon and diet starting at 4pm -- per usual. Also unique to the holiday is the annual Christmas Spamburger at lunch, prepared after the presents under the tree are opened, although consumption by all family members is not required. Trivial Pursuit takes up the better part of the afternoon, until dinner of prime rib and potatoes, in memory of Grampy Shep and his preternatural love of red meat. If Christmas and Chanukah coincide, the Menorah is lit and latkes are served as necessary. Dreidel is considered being played for about three minutes, until we all admit we really don't know the rules, or how to make the damn thing spin correctly, and just play Scrabble instead.

3. Decorations: The Shepherd Family Christmas Tree is the kind of tree that would make Martha Stewart weep. By that I mean that there is no theme, no color coordination, and the ornaments have been randomly accumulated over the years, and, in truth, are mostly pretty fugly. But, and this is very important, NO ORNAMENT MUST BE DISCARDED NO MATTER HOW HIDEOUS UNTIL IT IS BROKEN BEYOND ALL HOPE OF RECOVERY. If it's kinda broken, it is valid. This is how we wind up with family favorites like Barfight Santa, who got too close to a red candle one year and looks like he's been punched in the mouth. Or Vietnam Goofy, who has been missing a foot as long as I can remember, and the suggestion that he lost it in 'Nam seemed as good a backstory as anything else. Or the Magical Christmas Toilet Paper Roll, dating back to kindergarten. Or the McDonald's Happy Meal toys that by rights should have been thrown out 20 years ago, but still make it on to the tree every year. Or Sergeant Fire Hazard, who is made out of yarn, and one day will be ignited by a Christmas light, and likely kill us all. These are not pieces of shit. They are HEIRLOOMS, and being the one to hang any of them on the tree is a unique and treasured honor. Fights have broken out over who gets to place Barfight Santa.

So that's kinda how we roll here. There are some pictures to be found here. Do drop by when you have a chance!
Posted by Robyn at 2:41 PM

By now you probably heard that the northeast had a bit o' weather this weekend. It must be annoying if you're in say, Fargo or North Platte or somewhere like that to watch the media lose it's mind over a piddly foot of snow in Manhattan. I sympathize. We are a bunch of effete city folk, and we ought to just own that.

That said, holy crap, it snowed this weekend!

Blizzard conditions came to Manhattan late in the afternoon, and the TV advised us all to stay in and hunker down. So of course the whole city came out to play instead. I myself hit up three separate shows in the Village and did some ill-fated Christmas shopping, which resulted in me slipping on the sidewalk and shattering a highly-sought after bottle of bacon-flavored vodka. (Cut to scene of me screaming on sidewalk, and people asking if I'm okay, and all I can do is shout "The vodka! THE VODKA!" I was fine. A week without Robyn falling down is like a night without stars). 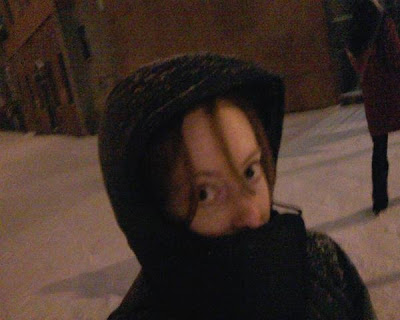 But I still managed to shake it off and get my rock and roll on. My pals the Ramblers played a benefit concert that mustered over 100 people in a small W. Village club, and afterward we all ran through the snow so half of the Ramblers could take the stage again at Scott Stein's show at the Bitter End, which was packed. I was fetchingly dressed in a flattering, form-fitting royal blue Express sweater...which spent most of the night hidden under layers of the Chastity Parka's Gore-Tex. Shmeh. I'll get the bombshell thing down better in 2010. Pinkie swear.

So New York can still rock it in the snow. My pals were actually still ready to rock at a house party in Brooklyn, and I had to call it a night because I was too pooped. I ended the evening by joining three strangers in pushing a motorist out of the snow. It was a nice moment, and we all waved goodbye to the car as it sped off to the FDR highway, like a condor being released into the wild. Ahn. That kind of stuff happened everywhere. Although some folks, like this poor bastard, weren't so lucky:

Here's some more video of the Village mid-blizzard, and the Ramblers rocking out at a venue with more machine-generated fog that I ever seen at any gig, ever.

It's not all raucous rock and roll and mind-melting soft rock with my pals, you know. Here's Three Ladies Singing bringing some class to a Toys for Tots benefit in Harlem last night: